The story - a brief overview

My family SUTTON research begins with Richard & Elizabeth (OHara) SUTTON in Stockport England 1869. Richard was from Staffordshire and Elizabeth from Scotland. Born in July 1859 was a son Joseph.

Joseph completed High School at age 17 and began his practical career with the London Northwestern Railway, and later the Lancashire & Yorkshire Railway holding positions of station agent in Brighouse and Elland. He then went to London and engaged with the Bennett Shipping Company as their manager at Boulogne for 5 years.

Joseph then went into business for himself in the Corn Market at Mark Lane for 10 years. At Liversedge in 1889 Joseph Married Miss Emily Law of Norwich a daughter of George and Zilla Law. In the Corn Market he was very successful and had amassed a great fortune until the famous corner in wheat was promoted by Leither, the outcome of the coup left Joseph in ruin.

In 1903 with the famous Barr Colony, the SUTTON family boarded the SS Lake Manitoba and sailed for Canada, arriving in St. John NB, then by train to Saskatoon Saskatchewan. He had with him his wife, 11 children and a fortune of $80.00. Undaunted, he rented a Shack and went into the Milk business, strange occupation for once wealthy broker on the London Exchange. By 1909 he had bought the shack and property and a census of 1914 showed it to be worth $200,000.00.

The engine that first drew the Barr Colonists, coming into Saskatoon. Never such an Easter Sunday known before as the one in store for the Colonists. Confusion reigned Unloading the baggage from the Manitoba would take all night. By morning one fact emerged crystal clear. It was no myth that the Barr Colonists had brought with them more baggage than any other emigrants before. It would take 5 trains to transport the Colonists and their Belongings.

His next venture was to buy the Empire Hotel in 1910. He rebuilt the Hotel adding the first Theatre and Opera House. By 1912 Joseph was worth over 1.2 million dollars. By now there had been fifteen children born to their marriage. Two died at birth the others being Hubert, Edward, Emily, Mabel, Joseph, Richard, Reginald, Patricia (my Grandmother), Charles, Raymond and Bernard. Another strange fact about Joseph and Emily is that she refused to have any of the other children born in Canada. For every birth Emily would return to England which was no easy feat in those days.

In 1920 due to bad advice Joseph again found himself with nothing. With the majority of the children grown Joseph, Emily and son Bernard boarded a train for Vancouver Canada and sailed for New Zealand. Joseph and Emily returned to Canada in the mid 30's to live out the remainder of their days in Toronto. 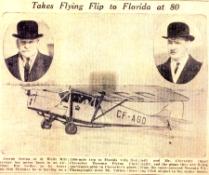 Joseph was still not without his adventures. In 1936 having realised he had never been to Florida he enlisted the aid of a friend and pilot and flew!

My Grandmother Patricia wrote a book about her memories of the crossing and her life as a young girl in Saskatoon entitled 'A Saskatoon Girl: A Memoir of a young Saskatchewan girl growing up in the early 1900s'
WARNING